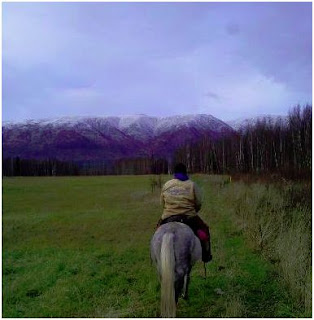 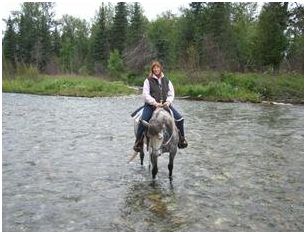 Several years ago I was griping to my family about how I "never" got to ride. My husband suggested using my GPS to track my miles and see just how much I was getting to ride. Then I started riding with CTR Alaska where I needed the GPSed miles to set trails and timing for the Bald Mountain Butt Buster, an NATRC sanctioned Competitive Trail Ride. I was pleasantly surprised to see just how much I was riding and earned a couple of nice prizes from the APHA Ride America program. It was a blast riding in the Distance Derby in 2012 and I am looking forward to logging the miles in 2013.

My primary ride is a gray paint named DaVooshka. It means little girl in Russian. My backup is The Mare. She is a 26 year old Belgian/QH cross that was retired from an outfitter. She is the closest horse I could find to a 4 wheeler for my very non-horsey husband.

I belong to CTR Alaska, a group that puts on one of the two Competitive Trail Rides in Alaska. I don't compete but am active behind the scenes clearing trail, flagging, timing, safety rider and whatever else needs to be done. In 2013, the Fairbanks group will be hosting Challenge of the North, the most northern NATRC sanctioned ride in America. I am tentatively planning on competing and have invited Tammy Vasa (and anyone else who wants) to come ride with me.

Posted by Distance Derby at 8:48 PM