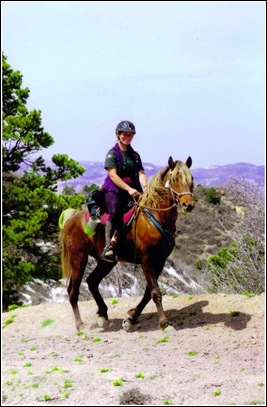 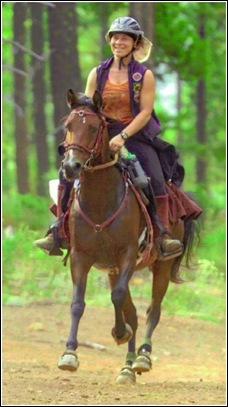 My name is Natalie Herman and I live in McKinleyville, California.  This is my first time entering the Derby (how fun!) and I figure it will give me motivation to ride and really get out and condition my horse better.  I am hoping to do the Tevis Cup with her in 2014 (was going to try 2013, but my calendar around this year's T-day is just too full!) and I need her to be more up to snuff than she has been.  I tend to be fairly lax about conditioning since I don't ride 75-100 milers and ride way in the back of the pack on all other distances.  I also want to have a motivation to update and maintain my blog for Eowyn (http://eowynsthunder.blogspot.com/) which totally fell by the wayside after the 2011 XP ride.

My teammate is my 7 year old Quarmorab (father Arab, mother Morgan/QH), Ewoyn's Thunder. I own her mother and specifically bred Eow to be my endurance partner and hopeful Tevis horse.  Her mom, Hoanna, is a smooth, calm and fun little mare to ride.  She is excelling in Trail Trials right now, on lease to a horse crazy teenager.  Her father was the highest mileage AERC stallion and Hall of Fame horse, DR Thunder Bask, that I chose for his mileage record.  My main goal is to have a horse to ride for 10,000 miles and years of fun, not to win any races.

I am a natural hoofcare provider on the coast of far northern California (no, San Francisco is not really northern CA...we are another 6 hours north of that! LOL) and am always endeavoring to learn as much as I can about whole horse healthcare.  I recently began learning equine bodywork and it has made my mare's life, and my clients', much happier!

I also own a KMSH stallion, Intrigue's Firestorm (http://stallionadventures.blogspot.com/) that I want to start up in endurance again.  We had an injury set us back in 2011, then in 2012 I was too busy keeping Eowyn going to do much with him later this year.  His blog has also been sorely neglected, so hopefully I will get some motivation up to keep his going as well.

Posted by Distance Derby at 9:13 PM