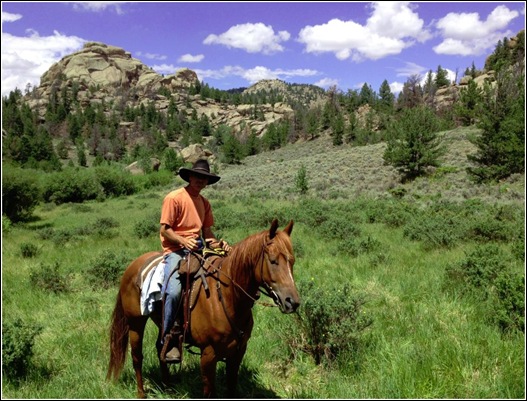 As Written by TV of Team 1:

So I asked my husband, John, if he wanted to join the Derby this year.  His response was, “What’s the ticket for that?”

I said there was no price to join.

He went on to say that he isn’t going to run no computer to do this and I told him I would enter his miles for him and that I had an extra GPS he could use.

He didn’t necessarily say no.  And it might motivate him to ride a little more.

I then asked if he wanted his team to be called “Fancy” after his horse.  He said that he might get a wagon rigged up for Baby Dutch and he might drive her.   She is almost 13 years old and he’s been saying this since she was three but maybe this is the year, you think?

So I suggested perhaps his team name should be “Driving Miss Baby” but he didn’t respond.

Since I use the “Vasa” name for my team, I have simply given him his initials, “JV”.

And this is as close to a bio as we will get.