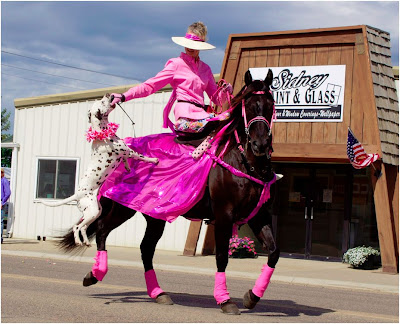 My name is Peggy Ann Strupp; I live in the tiny town of Crane, MT (pop: about 50) in northeastern MT near the ND border. I enjoyed drill team before I moved here, but now I'm mostly a trail rider. I've been riding since I was 4; & except for a few years during our early marriage, I've owned a horse since I was 11 (I'm now 56). I still ride in the first saddle I ever owned.

My team is made up of 14 year old "Shadowfax", a dark bay grade gelding; and 15 year old "Pate", a red leopard Appaloosa; accompanied by my two Dalmatians, Rad & Luan. I train the dogs to follow the horses so that we can compete in Dalmatian Road Trials (a test/field trial of the Dalmatian ability to "coach", or follow the horses).  And yes, I bought the Leopard App to match the dogs.  He's my 3rd leopard App.  I also ride in parades.  I usually ride sidesaddle on Pate with the Dals on either side.  Inspired by a video I saw on YouTube, I made an eagle costume for Shadowfax & rode him in the high school homecoming parade.  I teach Spanish to HS & MS students.

I enjoyed being in the Distance Derby last year, and enjoyed meeting up with some of the participants to trail ride at Mt. Rushmore.  What a kick!  I never would have braved that without the Distance Derby!  Looking forward to another good year!

Posted by Distance Derby at 8:31 AM