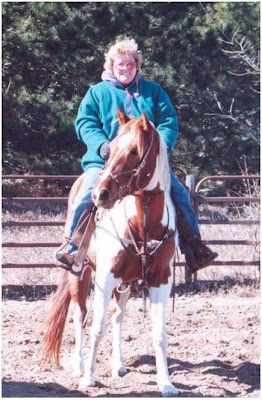 My name is Marvel Rahn and I live on our dream acreage near Wayne, Nebraska with my husband, Terry.  He is a nonrider but I haven't given up on him yet.  Anything is possible!  I am following my dreams with four horses and a pony and sharing my passion for horses and riding with my grandchildren.

The 2012 Distance Derby was, in a word, awesome!  I look forward to riding in 2013 with a renewed sense of purpose.  Each January 1st I envision what the new year might have in store.  This past year held many surprises, some good, some not so good.  Such is life.  I survived the challenges and came through stronger and more determined than ever.

In choosing a new photo for my 2013 bio I could have chosen Star (Paint), my main mount and only gelding.  Twister (Paint mare), my riding project for 2012, would have been a great choice.  Or perhaps I could have chosen Rain (breeding stock Paint mare), or Sandy Fox (QH Buckskin mare) because I hope to be riding them in 2013 again also.  However, I have chosen a photo of me and Sandy (Star's dam) from 2000 because it epitomizes where this journey began.  I can only guess what 2013 holds.  What I plan to do, which horse(s) I will get to ride, and what actually happens is yet to be seen.  Sandy was my dream horse but God had other plans for her and for me.  (Sandy died in 2002.)