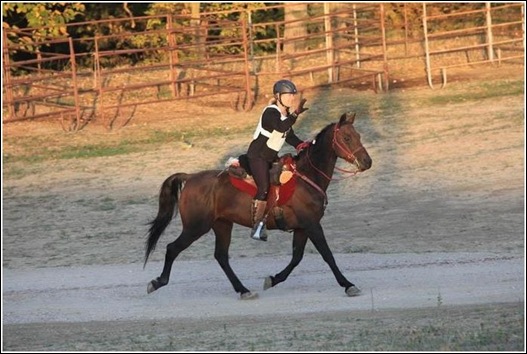 My name is Sarah Rinne and my equine trail partner is Frontgate Phoenix aka Phoenix the Machismo Morgan.  Phoenix and I have covered a lot of miles together both recreational and competitive so the Distance Derby is right up our alley! My husband Seth and I and our three children Cheyenne, Gabriel and Ruby reside on the Rinne Ranch near Steinauer, Nebraska in beautiful Pawnee County where the dirt roads, hilly tree-filled pastures and hay fields are plentiful for miles of riding! My husband and I own and operate Rinne Hay Service and put up over 15,000 square bales and about 300 round bales each year of native prairie, alfalfa and wheat straw delivering to private horses owners, commercial stables and feedlots. I also have a "town job" and am the Chief Probation Officer for District #1 Probation, State of Nebraska Probation covering eleven counties in Southeast Nebraska. I am a former Marine and veteran of Operation Iraqi Freedom and am proud to have served my country!

I have been riding horses since a very young age and began my competitive trail riding career in 1988 on my palomino mare Nici with the North American Trail Ride Conference (NATRC). I have also been an avid team roper in the past, volunteered for many years with therapeutic horsebackriding programs and was a certified Special Olympics Equestrian Coach. I have been a member of NATRC and the Nebraska Endurance and Competitive Trail Ride Association (NECTRA) since 1988...going on my 25th year!!!
I have ridden numerous horses of all breeds throughout the Region competitively but have been competing Phoenix since 2007. We had our challenges starting out but after establishing our connection, he has been the most incredible equine partner I've ever had. I am hooked on Morgans now! (But appreciate all breeds!) Phoenix and I are looking forward to the the 2013 ride season (both competitive and recreational) and all the great horses and riders we share the trails with!

Posted by Distance Derby at 7:26 PM