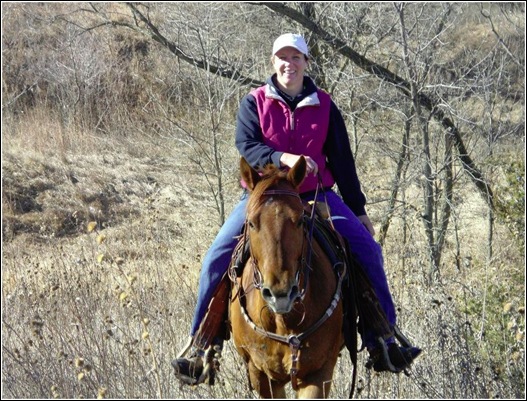 Up until October 2011, I had been horseless for 15 years!  Not sure how I did that!  I sure missed having horses and didn’t realize how much until I bought my first one on an “accident”.  I bought Bullet at an Exotic Bird / Animal auction in Lexington, NE.  They couldn’t get a bid on him and were down to $35.  I thought I would run him up to $100 and then get out.   Long story short, I bought him for $90!  I had already called and asked the hubby permission for a horse two times prior that day and his response was always a flat “no”, so panic set in as I realized I had just bought a 3 year old stud colt that I knew nothing about.  Needless to say Kurt wasn’t impressed and it was a bumpy month at my house until Bullet started proving himself.  He even had to admit what a bargain I had found and even though he still doesn’t share my passion for horses or understand it, he allows me to completely submerge myself in the horse life!

Since October of 2011, we have added another colt named Remington (there’s a pattern emerging with the names lol).  He is a 9-10 month old grade blue roan.  I am very excited about this little guy and look forward to our new venture together.  Sometimes a little apprehensive, since I have been out of the horse training for several years and am quite rusty.  It’s a good thing I have a close friend and neighbor who is my resident professor of training.  She has helped a ton along the way with bullet and I look forward to her help with Remington!

I love riding every free chance I get.  My youngest daughter has an interest in horses and riding.  I look forward to sharing this with her.  My older children like horses and have an interest too, but their lives are incredibly busy and we only have one broke horse to ride.  Hoping to change that sometime in the future… still working on hubby about adding a third horse!

I look forward to calculating miles this next year and am so glad to have found such a neat grup of people to share my passion with.  This should be fun!

Posted by Distance Derby at 7:53 PM